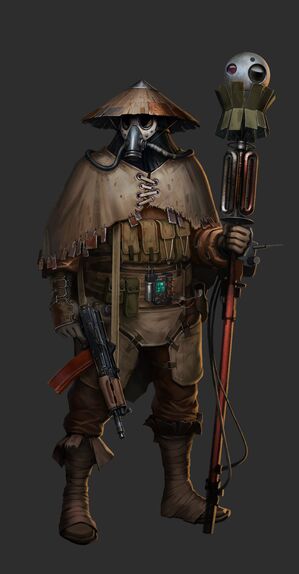 Retaining too much humanity to be called the Lost, but not humans in the full sense of the word, Nomads explore the most remote areas of Wasteland without fear. Their cars are hybrid designs combining features of airplanes and vintage cars.

Soon after the disaster, those who changed too much to be called people, began to appear: The Lost. Their logic is often misunderstood by ordinary people; they are shunned and dreaded.

The Lost wear masks and full suits, so that no one knows what exactly they are hiding under it. If the mask is removed by force, then the person turns to dust. Only clothes remain, and all who are around lose consciousness and can remember only a bright flash of blue flame. Many of these people then see nightmares and go to the desert, where they acquire their own masks.

Lone wolves who received new knowledge or abilities gradually began to unite in groups, according to their talents and character. Nomads are quite a large group of the Lost. They are wanderers who can survive in any natural environment, who visit the most remote corners of the wasteland and take rare artifacts from there.

Sometimes they act as mediators between the inhabitants of the Valley and the Lost who live deep in the wasteland and can not really think like people.

Since early childhood, he lived dangerously close to the Sepulchre and gained immunity to its disastrous effects. He organized a gang of teenagers and horrified the inhabitants of the Valley, until they joined forces in the fight against the impudent gang. To escape their righteous anger, Ulysses had to flee and hide in the heart of the Sepulchre. What he experienced there is unknown, but coming out of the shadow of the destroyed skyscrapers, Ulysses already wore a mask and never again settled among people.

Not only his appearance changed, but also his character. For many years he's been secretly helping those who have been harmed in youth or lost their loved ones...

The secret knowledge that he received in the Sepulchre, as well as the indomitable thirst for activity made him the unofficial leader of the Nomads.

Nomads offer a well-rounded selection of parts that form a balance between speed and resilience. As jacks-of-all-trades, their vehicles are not particularly exceptional in any given area, but are also free of any significant drawbacks, allowing them to fill any role on the battlefield competently.