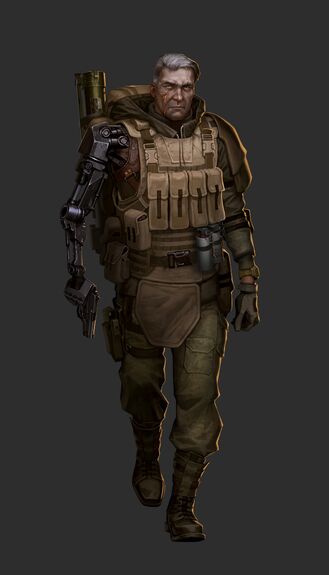 Elite Squad, executing the most dangerous operations far away from civilization. They have access to resources and technology of the Brotherhood. Can quickly change dislocation, moving over rough terrain. Prefer ranged combat and shooting from behind cover.

Steppenwolfs are one of the factions within the high powered organization of the Brotherhood, along with the Scavengers. Wolfs are an elite squad, carrying out dangerous missions in rough conditions, the punishing sword of the Brotherhood.

In the past Steppenwolfs were mostly military men. Later all kinds of Survivors sided with them, but the frame are still those who helped civilians in the harsh years right after the catastrophe. To this day Wolfs prefer using state-of-the-art works of military scientists and engineers in their crafts.

For as long as he remembers, Eric was always serving his country. When the world collapsed, Stahl remained a soldier and alongside several other top-ranking officers continued serving the interim government. Generally speaking, his life hasn’t changed much. The regs are still regs, while the enemies are always easy to find.

Years passed, and the goals of the Brotherhood were gradually changing, as well as their attitude to common people. Eric realized that his ideals were getting more and more out of synch with those of the command. He tried to spend as much time as possible in combat, sparing neither himself, nor his subordinates. With his honesty and uncompromisingly following the regs Eric earned respect of soldiers as well as growing mistrust of the Headquarters.

His popularity was so huge that even after losing his arm he wasn’t released as any other flawed member of the Brotherhood, but instead got a mechanical prosthesis and a corresponding nickname.

But when his scars and eyes started glowing, Eric understood that he had spent too much time in the Wastes, and the time came to embark on his last crusade. He took the best fighters among those not anymore welcome in the Headquarters, and darted northwest to fight for the new lands in the name of Brotherhood.